More or less since the start of my assignment at my current client, four years ago, we have had some form of a cross-team stand-up at 10:00 every day (often named Scrum-of-Scrums). But now that we have around 10 teams, we started to notice some issues lately. People joined too late or didn't even show up at all. And if they were there, some of them didn't share much or were clearly bored by the things people were sharing. Nothing is more painful than a few people standing in a circle, playing with their phones and picking their noses. 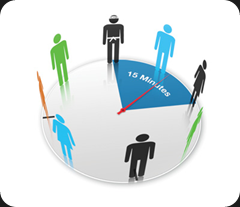 I found that pretty frustrating, especially since I really valued that stand-up. In my role as chief architect, I'm working mostly on technical projects and long-term architectural guidance. Only when teams have to complete architectural changes as part of bigger functional user stories, I get involved. So spending 10 minutes a day on hearing what people are doing is a great investment for me. The only other colleague who felt the same was our support and release manager with which I collaborate a lot, often on cross-team topics like these:

I had a hard time accepting that people wouldn't be as interested in this as me, so after consulting with our in-house agile coach, we decided to interview all scrum masters individually in the hopes of getting some usable feedback. In short, we asked them what kind of value they would like to get from that sync-up and what topics they would be interested in. Here's a summary of the topics people proposed.

Are you're noticing this at well? Those are a lot of great things to discuss. So apparently nobody had any real objections on the contents after all. They just wanted all participants to be sharing something rather than standing there with sheepish eyes. The biggest annoyance was caused by people not showing up (ironically by those exact same people). But what really reinforced my believe in the standup was a remark that one of the quality engineers made. She said "You don't know what you don't know". And with that she nailed the very purpose of a daily stand-up.

With that renewed insight we decided to reboot the standup with a very clear agenda (which we’ve put on the wall at our regular standup location), a reminder of the startup time, and explicit 'rules' on who should be there and what to do if he or she couldn't be there. Now each team shortly shares:

Next to that, we will always consider whether any of the following is worth mentioning

We're just four weeks further, but I think it's working very well, especially after we decided to tune down the frequency to three stand-ups per week. Everybody has plenty to share and many dependencies and conflicts were detected since then. But are we done? Of course not. I'm pretty sure this isn't the last time we talked about this.

So what do you do to regularly align teams? Let me know by commenting below or tweeting me at @ddoomen.