Two weeks ago, I talked about Flowdock, an online tool to aggregate multiple sources into a single environment where agile teams can work together. I also promised to look at an alternative service named Slack. When we introduced Flowdock, somewhere in November 2013, Slack was still in its very early stages. However, after one year, I decided to check it out once again…and it has changed, boy has it changed. But before I continue, let me quickly recap Flowdock's biggest pain points:

So here's one of Slack's many views: 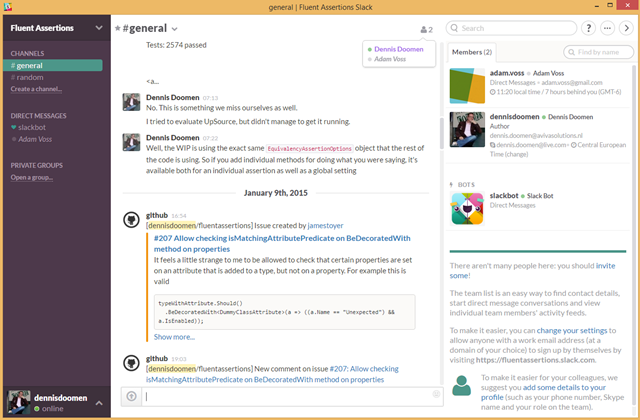 You will immediately notice that messages from external services such as Github or TeamCity appear inline with the remainder of the conversations. I'm not entirely satisfied with the look-and-feel and the noise created by the RSS feed, but I suspect the guys behind Slack will work on that soon enough. The right pane is used to either provide an overview of the members, your recent activity or mentions, starred items or uploaded files. What you can't see are the many user and team options, in particular on email, desktop and push notifications. Looking at the available integrations, those seem to be on par with Flowdock, but when you look a bit closer, you'll notice the maturity of those integrations. For instance, the GitHub integration options look like this: 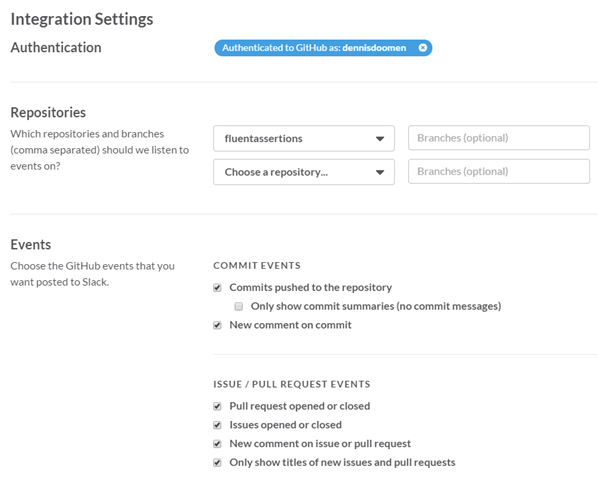 But it's the little things that are causing Slack to feel so mature on many levels. For instance, those weird SharePoint and OneNote URLs are no issue as all. In fact, when you paste a URL, Slack will display the URL in the same fashion as Facebook does, including a nice little preview.

Posting a message to another channel (which is the Slack equivalent for a flow) is also a no-brainer, as well as using MarkDown to include nicely formatted code elements.

I can never find something back in Flowdock, so being able to use Outlook-style keywords is a big reliever. 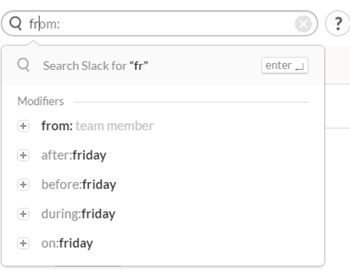 Other notable features missing in Flowdock are the private discussions with more than one person and the micro-blogging platform that allows you to write little snippets of text with syntax highlighting as a starting point for a discussion. 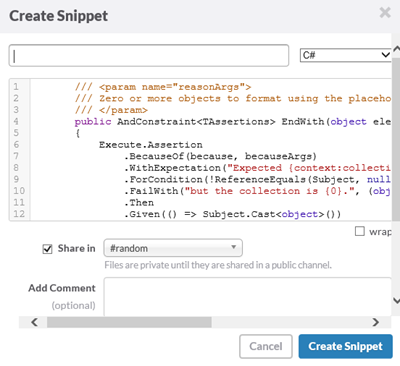 So what's the catch here? Is it all shiny and new? No, definitely not, but it gets pretty close. The guys behind Slack are claiming they are working on it, but for now it lacks any kind of threaded discussions. After playing the please-use-the-reply-sergeant for over a year, I'm not willing to let go of that unique and essential feature.

Slack is a really promising, especially with them supposedly working on a Windows Phone and Windows 8 version as well. But for now, I’ll be sticking to Flowdock…