Why should I care?
As a long-time maintainer of coding guidelines for C#, it should not come as a surprise that I believe tools like SonarQube can really help you improve the quality and maintainability of your C#, JavaScript and TypeScript code. It doesn’t give you the fast feedback loop that you get from local development tools like ESLint and .NET Static Analysis, but I’ve lost count of the many times it saved us from serious production issues. However, SonarQube always had a bad reputation when it comes to repositories that contain both the front-end as well as the back-end code. For example, for us, it’s pretty common to have the .NET APIs shipped with the React/TypeScript SPA as a single unit. Well, I’ve done some investigations recently and figured out there are practically two approaches.

Single repository with a single SonarQube project
This approach requires the front-end code to be part of the .NET solution file, and thus works best for teams where front-end developers are fine to use the .NET IDE, or where all developers are full-stack developers. It will give you a single report for the entire repo, for example, through a status check on code repositories like Github. The flipside is that somehow, it won’t tell you the total number of tests across the different languages.

Here are the high-level steps to make that work. The exact steps are obviously highly dependent on the specific project.

Single repository but with separate SonarQube projects for front-end and back-end
For teams where front-end and back-end developers mostly work in isolation, each using dedicated tooling, but still delivering the entire solution using the same release cadance, the previous option may not work. This applies to most of the teams at ORM as well as the newer developments at EHS. In that case, having two separate SonarQube projects fueled from a single repository works a lot better. This is a relevatively new option in SonarQube and not that well described. That’s why I decided to write this blog post. The advantage is that you end up with two nicely separated reports in your Github pull request. 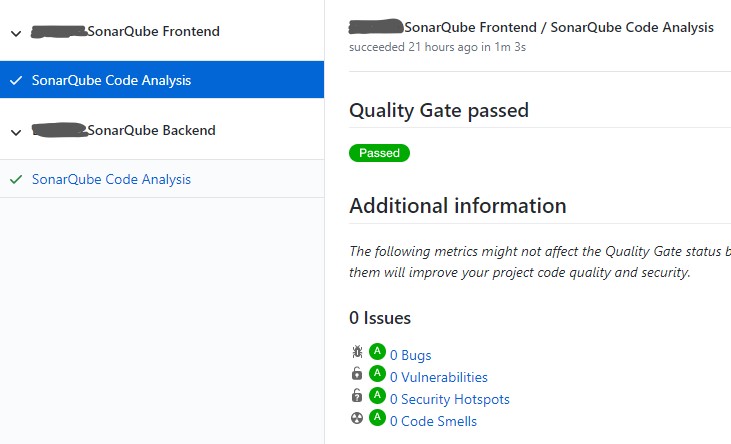 The disadvantage of this is that it’s a bit more work to set it up correctly. So here are the high-level steps to get this working.

Some final words
The need for that second more elaborate option is really a necessary evil due to the .NET scanner forcing you to add all your front-end assets to .NET projects. This is a known limitation, so hopefully Sonar will fix this at some point. Also, having a NuGet package that includes Java, just like the NPM version is on my wishlist as well.

So what do you think about all of this? Do you believe in the value of SonarQube? If so, how do you map your SonarQube projects to your repositories? And if not, what do you do to control the quality of your code? I would love to hear your thoughts by commenting below. Oh, and follow me at @ddoomen to get regular updates on my everlasting quest for better solutions.

A story about User Stories

My personal experiences while working with user stories for gathering, tracking and planning requirements

The many hats of a software architect

After a discussion with some folks on what being a software architect really means, I decided to capture the many hats you have to wear

How to work from home and still keep your sanity

Given the signs that this working-from-home isn’t going to change for another six months or so, let me share some of the things that have helped me to stay sane

A month without R# or Rider - Editing, Debugging & Refactoring

Did Visual Studio really get so much better since the last time I tried? Or is JetBrains Rider still years ahead of the competition. Let’s look at editing, debugging and refactoring.