It may be coincidence, but the two best tutorials I attended at Agile DevOps East both ran on the same day. The first one focused mostly on agile transformation, but briefly touched on the leadership topic. This one, let by Jennifer Bonine, took this further by focusing on being a better leader by understanding people. To break the ice, she started her session by having the group spend five minutes to meet as many people as possible using a couple of pre-printed questions. This was fun and such, but the real reason was her notion that better connected teams outperform others by 3 times. And inter-personal communication is important. According to a survey, 91% of the business issues are not caused by (lack) of competencies, but by communication issues. They are often caused by a lack of trust. We seem to emphasize the thing we don’t like and ignore the things we do like. This is caused by cultural ideas, life experiences and the influence of what others have said about us. This is called distortion of reality.

To understand how to break this vicious circle, she shared a model called The Ladder Of Inference that can help us understand how people react to situations. It all starts with perception, something you see, hear, feel or smell. What happens next is that you interpret this. You give it meaning based on your beliefs and values. Then emotion kicks in. You start to feel a response as a result of that interpretation. But that’s not all. That emotion feeds into judgement. You evaluate the situation or the people involved and quickly label them as good, bad, nice or unfriendly. Knowing that, one thing you can try is to always apply your Most Respectful Interpretation. So when somebody comes in late at a meeting, don’t get mad (which I do often). Instead, welcome that person and get him or her started as quick as possible. Understand that in communication, only 7% is about what you say, 38% is about the how the other party interprets your tone of voice and 55% is how they interpret the context and your body language. In other words, it is about how you say it and what kind of perceptions, emotions and interpretations this causes with the other party.

Now that you understand a bit better how people communicate, it’s time to talk about what leadership is. To keep that session interactive, she organized a brainstorm with the 50 people in the room to identify the core qualities of a good leader. According to them (us), they should have integrity, be a great communicator, be a motivator, have empathy, be honest, trustful and having the capability to trust people. Jennifer had her own opinions on this though. According to her, a good leader should lead by example (walk the talk, practice what your preach). Leaders should make others feel safe to speak up (or simply be human), use emotional intelligence and have integrity. They should challenge people to think by themselves and heavily invest in relationships. This all sounds like common sense, but I wonder how many managers amongst us have all those characteristics.

Assuming you agree with Jennifer, you probably also agree that it helps to understand the communication styles of the people you work with. I’ve been employing Daniel Ofman’s Core Quadrants model more than a couple of times in my career. It’s a rather cumbersome process, so I’ve mostly used it to understand why certain people annoy the hell out of me and others don’t. But Jennifer shared an interesting model that tries to divide people into four groups, each identified by a color representing their primary energy. To help us understand ourselves, from a long list of colored words, we had to circle the words that we most feel associated with. By counting the number of selected words per color, the primary and secondary energy colors become apparent. Then she regrouped the room based on the primary colors and explained what they meant. 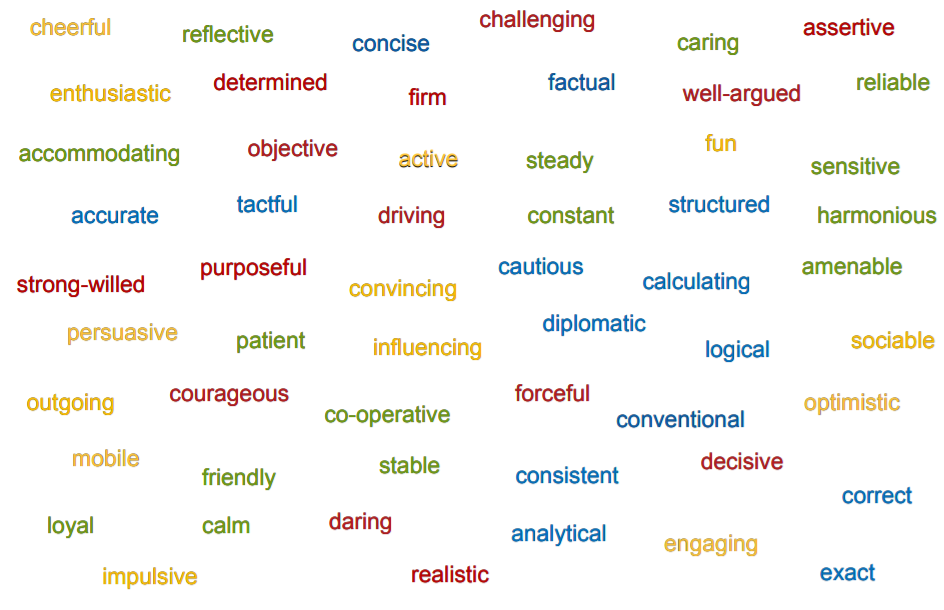 People with earthly green as their primary color do their job harmoniously and like to be engaged. They are collaborative, empathic, adapt easily and are flexible. They love to help others and focus on stability and values. In collaborations they like to know what’s in it for them and what role will they play in. However, other people typically see them as mild and undecisive.

Their counterpart on the spectrum are the fiery reds. They like to get things done, preferably right now, and are usually very opinionated and impatient. They take charge, are competitive, proud, purposeful and very structured. Their communication is quick, concise and without fluffiness. The want to know what are the specific outcomes are going to be, or what you want to accomplish with a meeting. Because of that, they can come over as aggressive, controlling, driving, overbearing and intolerant.

The people in the sunshine yellow region have elements from both red and green. They love to do things together and like to have fun. They are spontaneous, conceptual, imaginative, radical, sociable and demonstrative. They strive for recognition and like to know what’s in it for the group. They often appear as overly excitable, frantic, indiscreet, flamboyant and hasty. Because of that, they may seem disorganized. When you want something done from them, they mostly care about how it is going to affect the people around them. In short, they need to be inspired.

On the opposite of the scale of the yellows you’ll fine the cool blues. They follow high standards and are specific and correct. They do that because they want to make sure other people understand their arguments, so they try to acquire evidence. They are very reliable and cautious, but also are measured and observing. They can come over as stuffy, indecisive, suspicious and cold or reserved. But it’s merely that they want to do their job right. Countering a red with a blue can be a very powerful combination. If you come to them with ideas, they want to know about data and facts that support that idea. They like to understand whether this idea has been proposed before and why it worked or didn’t work. And if they have objections, they want to know how you are going to address their concerns. 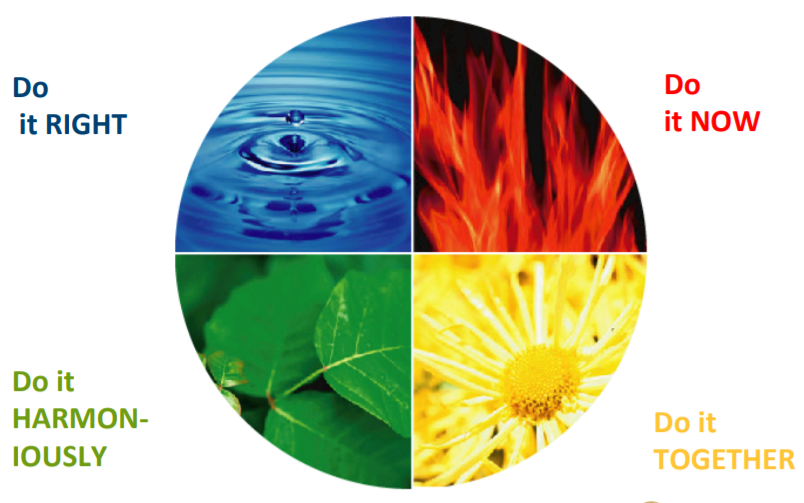 Having explained all of this, it became also clear how skewed the distribution was. A significant part of the group where yellows, and only five people were red (of which one of them was me). So the next thing she did was to take rounds between the colored groups and have the other groups ask questions on how they would be handled. This resulted in some interesting observations. For instance, reds have a strong determination that influences those they interact with, whereas greens seek deep harmony and depth in their relationships. They also defend what they value with quiet determination and persistence. This can inevitably conflict with the single mind-ness of reds and their focus on results. Especially because greens like to ensure all individual perspectives are heard and consider before choices are made.

Blues are even a bigger challenge for reds since they like to think things through before they commit to action and generally maintain a pretty detached and objective standpoint. They really want to understand the world around them and like their information to be complete and accurate. In that sense, yellows are a good match for blues. They are easier to work with because they enjoy and seek the company of others. They approach others in an engaging and inviting manner and have a strong desire to be involved. But be aware that they also like to be noticed and appreciated for their contributions.

What I love so much about this model is that knowing the different types of people, what they value and why they behave in a certain way can really help you adapt to each other and improve the collaboration. In fact, somebody who used to work at Oracle explained how they even had LEGO blocks on people’s desks highlighting the primary and secondary energy colors. But don’t forget, it’s a model. And models are an abstraction of reality and thus ignore certain edge cases. Nonetheless, I’d love to know how well the list of words and the resulting behavior description matches with your personality. Let me know by commenting below. Oh, and follow me at @ddoomen to get regular updates on my everlasting quest for better solutions.