Let's be honest here. Since Microsoft has been shipping technical previews of Windows 10, I've been repaving my laptop a couple of times and then reverted to Windows 8.1. I didn't like the intermediate touch experience and stability was also not its greatest strengths. In fact, I reverted to 8.1 just before Build because the preview drained my Yoga's battery way too fast. All in all, this has been the most disappointing experience with a pre-release of a new Windows version ever.

However, at Build 2015, Microsoft has demonstrated that their claims for having one platform for all devices were really warranted. In the light of this blog's theme, they've been continuously improving that experience since then, heavily relying on the feedback from the people registered for the Windows Insider program. What they've shown during the keynotes looks absolutely stunning. I'm looking forward to upgrade to that latest build as soon as I'm back home.

So what made my engineering heart tick a bit faster? Let's start with this nice picture: 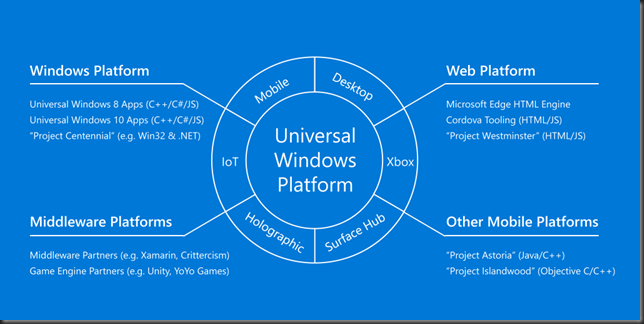 As I understand it, the goal of the Universal Windows Platform is twofold:

With respect to the first point, IMHO one of the coolest things they are doing is using the same core operating system between phones and desktops. To prove that that is really true, they connected a keyboard, mouse and display to the phone. I was expecting to see the Windows Phone home screen enlarged to fit the screen. Instead, we got a real Windows 10 desktop with a start button that looks like the Windows Phone home screen extended with extra options and settings. And that's not all, the presenter at some point opened a .pptx file from an email and launched a real version of PowerPoint. This is what Continuum is about; dynamically switching between form factors and adapting the user experience accordingly.

With respect to the second point, Microsoft went to great length to allow deep integration with Windows 10. Since she doesn't speak Dutch yet, I personally don't care too much about Cortana. However, I do see the potential of deep integration. We're way beyond the point of setting an alarm clock using a voice commands. So to make it as easier to get access to applications as easy as possible and keep the install/uninstall procedure clean, they’ve increased the importance of the Windows Store. For instance, you can now distribute traditional WIN32 and full .NET framework based applications through the store. At the same time, they allow you to wrap a traditional website in a container, enrich it with Cortana and notification support and distribute it through the Store as well.

The same goes for the browser experience. Microsoft's new browser Edge has been rebuild from the ground up, obviously with a fast internal engine, rich Windows 10 integration and support for add-ons. In fact, Microsoft made a particularly easy to convert Firefox and Chrome add-ons since they use the same industry standard for browser plug-ins.

And even Microsoft's HoloLens is running Windows 10. During the 2nd day's keynote, they demonstrated building a Windows 10 app and then augmented it with HoloLens specific features. How cool is that? And if you're skeptical about the truthfulness of the marketing material, checkout this review.

All in all, the sessions here at Build managed to convince me Windows 10 is much more about a universal platform for building cross-device applications than just a new version of a desktop operating system. Together with the new conversion tooling to compile Android and iOS apps and games to Windows 10, and the fact that all upgrades within the first year are free, Microsoft has a big change for success.