A while ago, some business man from the US who travels a lot throughout the US as part of his job, was sitting in his airline's business lounge for a drink. Right after finishing his 2nd, an attractive women approached him and offered him a drink in exchange for somebody to talk to. Somewhere halfway finishing that drink the man passed out and awoke an indeterminate number of hours later……in a bathtub filled with ice.

Totally confused by the situation and without a clue about where he was and what he was doing in this iced bathtub, he noticed a chair next to the tub. On top of the chair there was a hand-written sign saying "Don't Move. Call 911" and a cell phone. After dialing 911, and after explaining the situation to the woman on the phone, she asked "Is there a tube of some kind protruding from your lower back?". The man reached for his back and shockingly discovered that there was indeed something exiting his back. "Try to remain calm sir, but they've probably stolen one of your kidneys"…

This story is one of the many examples from the book titled Made to Stick, Why Some Ideas Survive and Others Die by Chip and Dan Heath. I didn't even have to reread the original version from the book; it just stuck with me. Apparently there's an entire theory that deals with the characteristics a story must have to stick. Don't worry, I'm not going to spoil the reading experience by sharing those characteristics right here. 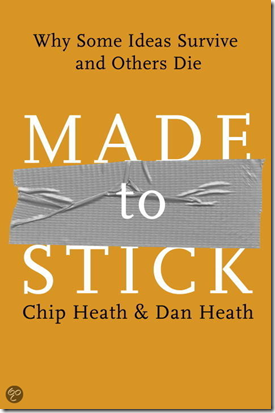 If you are a professional like me who regularly needs to convey some kind of message through a blog post, a presentation or even a tweet, you might learn a thing or two from this book as well. I'm not saying I'm a changed man, but it sure did contain some very useful tips that can help you bring back the message to its core. And if it doesn't bring you anything new after all, the book is still a lot of fun to read. It's packed with anecdotes and real-live stories that will most definitely surprise you.

Oh, and for the record, the above story is a myth