Here we are at the fourth and last day of Microsoft Build 2012. That so many people showed up at the first session is quite surprising considering the attendee party that went on until midnight in downtown Seattle. It was a typical attendee party; free food and drinks and live music. Since being amongst 2000 dudes is not our something we enjoy a lot, after grabbing something to eat, Jonne and I bailed out and took a cab to Queen Anne's to enjoy a few drinks at Peso’s.

Anyway, this first session was supposed to be a deep-dive on Windows Phone 8 internals. Although we never actual submerged, it was interesting to learn what they did to significantly decrease the start-up time of apps. And it shows, even painstakingly slow apps like FaceBook and WhatsApp start within a fraction of a second on our Lumia 920. I particularly like the way they employ the cloud to create optimized assemblies from the ones we submit through the App store. And did you know WP8 is still largely build on top of Silverlight? In fact, this was probably the only reference to Silverlight at all.

I have to mention one big issue with this conference though….Indian speakers. I would expect that Microsoft would at least make sure that all their speakers are experienced, trained and….understandable. I have nothing against Indian speakers, but guys, at least try to pronounce the things the way they should be. Looking at the Build twitter stream proved that I was not the only one suffering from this.

With another of those annoying bus trips done, we moved to a line-of-business talk with a huge line of people waiting to get in. Dennis Vroegop already shared his opinions about the transportation problem, so I won’t have to. Fortunately a majority of the Dutch community was part of this line, so that solved my problem a bit. The room was packed, even so that they decided to move the entire audience to another room just before the talk started. The talk was about building LOB apps, but spend the majority of its slot on synchronizing the app database (using a modified version of SQLite) using a customized version of the now deprecated Sync framework. The tooling look quite impressive and will become available soon.

I then went to a small meet up organized by Elizabeth Ayer from RedGate to talk about open-source projects. To my surprise Phil Haack, the author of NuGet a big catalyst for my Fluent Assertions project, also showed up as well as fellow Developer Developer Developer speaker Dave Evans. We had an interesting conversation on how companies can and should sponsor OSS developers. We didn't actually agree whether this should be done in the form of money or extra time. Money wouldn’t solve the problem of lack of time, so in my opinion, I would prefer some dedicated time. We also talked about the future of .NET, about Git and about Scott Guthrie's influence on getting a lot of Microsoft's products open-sourced. The hour passed by too quickly, because me and Elizabeth felt like we could have continued for hours.

The third session I attended was led by Mads Kristensen of the ASP.NET development team and covered the new features of the Fall Update of ASP.NET introduced. I've heard and seen most of it already throughout the other sessions. Nevertheless, the most noticeable part of his talk was the demonstration of Web Essentials 2012, a small add-on for Visual Studio 2012 that introduces a shipload of little HTML and JavaScript options. I'll most definitely going to install that little gem as soon as I get back to work.

Fortunately, in all their wisdom, the conference organizers did manage to schedule the perfect session for concluding this conference. Scott Hanselman and John Galloway took stage and managed to give the most entertaining (and still interesting) session of the entire conference. We got to play an on-line space game hosted using SignalR and watched how Scott completely bypassed the session's script, thereby utterly confusing his co-host Josh. All in all a brilliant session that you should most definitely watch.

By the way, the party was next to the Space Needle, so check out this night shot made with our new Lumia 920. Neat, isn't it? 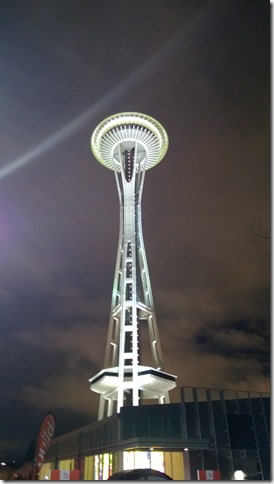