Well, as a starter, take an excellent German composer/producer whose origins lay in the trance scene, add some elements from well known artists like Jean-Michel Jarre and Genesis, and finally, complement with awesome male and female vocalists such as Kim Sanders and Peter Heppner and you get the ultimate mix of pop, ambient, trance and lounge music. This more or less characterizes the music Christopher von Deylen produces under the name Schiller.

After having been a fan since he released his first album titled Zeitgeist in 1999, last week I finally went to see him performing at the Palladium in Cologne (Köln). Although my girlfriend is not a big fan, she does enjoy quite few of the more vocally oriented songs, so she was so kind to join me. Obviously, we used the concert as an opportunity to visit Köln again and luckily the city was having wine feasts that week :-) 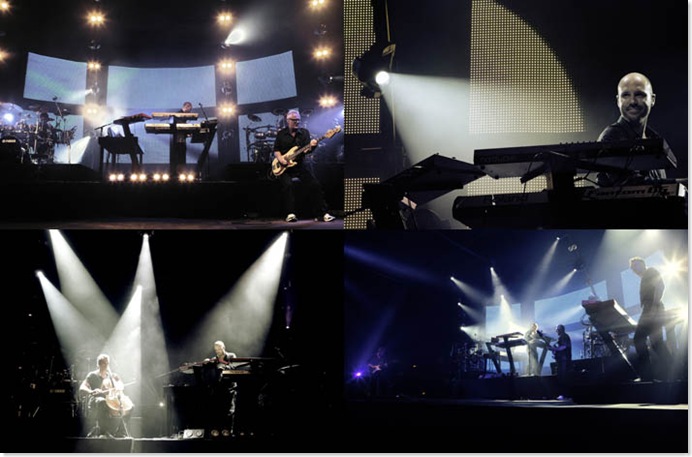 Since the Palladium can handle an audience of 4000 people, you won't be surprised that the queue we had to wait in continued along the pavement for multiple blocks. Surprisingly, the Germans are not as blunt or bold as the Dutch and waited patiently. Nobody tried to get into the front of the line. Anyway, the concert was well worth the waiting.

For an ambient-style concert it was quite spectacular. Check out this video for some footage from last year's performance, although I do think that that video does not quite catch the power of the real performance. Christopher was accompanied by another keyboard player, two guitar players (both acoustic and electric) and two independent drummers. All added a specific touch to the original synthetic songs, but especially the electric guitar and the drummers playing in parallel added an unparallel twist to the already awesome Schiller music.

I know that this kind of music does not excite everybody, but for me, this was an unforgettable experience. And once again, my respect for musicians has increased significantly. If you want to find out more about Schiller, check out this website or look for some examples on YouTube.