In this multi-part post, I’m going to share my personal experiences while working with user stories for gathering, tracking and planning requirements.
You can also download all parts as one comprehensive PDF for easy printing or e-reading.

What’s a user story?
So let me start with a definition. The ideal user story represents an independent, estimable and prioritizable functional or non-functional requirement, is written in the language of the business and adds value to the project or system. That’s it? Well no, it’s not that easy unfortunately, but I promise you will get a whole lot closer after reading this article (or run away screaming with more questions than you started with).

Why should I read it?
With the introduction of Team Foundation Server 2010, Microsoft showed that they are finally embracing the best practices of Scrum and Extreme Programming. The MSF Agile 5.0 process template contains a dedicated User Story work item type and includes reports and Excel workbooks that keeps you in control of your entire development process. If you ask me, that’s a great opportunity for delving deep into the depths of an Agile user story. 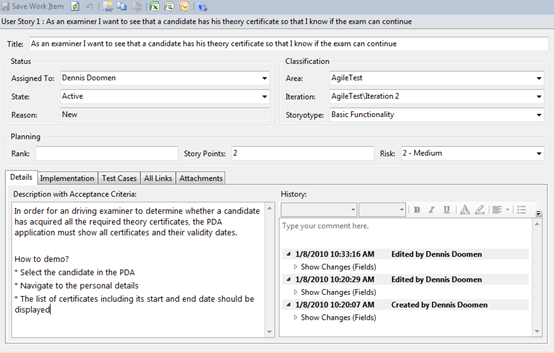 Is it a Use Case?
You might think that a UML use case or a task from a more traditional work-breakdown also meets the above definition. But nothing could be further from the truth. Alistair Cockburn, an authority on UML and the Rational Unified Process (RUP), has documented five levels at which use cases can be scoped. For instance, RUP usually involves writing use cases at sea level that describe (a part of) a business process which, by definition, covers a large part of a system. Ordina and Cap Gemini often work with use cases at fish level where a use case typically represents a screen or a part of it. Sea level use cases have the disadvantage that they are too large to use as a planning unit, while fish level use cases can provide only part of the desired functionality. I have a lot of experience with fish level use cases, and although they are very useful for obtaining a rough size estimate in Use Case Points (a method coined by Gustav Karner), they are often still too large to serve as a unit of work in an Agile project.

Then, what is it?
I think that one of the essential differences between stories and other requirements management techniques is the way in which large chunks of functionality are broken down into small bite-sized and estimable pieces. Imagine for example that you want to introduce the concept of a product to an E-commerce website. In many projects, building this may require breaking it down in a number of tasks or use cases. The administrator might need a screen for managing products, whereas the potential buyer might need a screen for searching for products based on certain criteria.

Every project has to prioritize its work. In a use case-oriented project it is quite possible that the screen for searching is built much later than the management screen. And because the team realizes use case by use case, and consequently, screen by screen, chances are that the team will first finish the management screen including all the bells and whistles requested by the client. The big downside is that the desired functionality is not finished until both screens have been fully built. In an Agile project it is quite possible that due to changes in priority or scope the 2nd screen is never build.

User stories try to deal with that by requiring that the above mentioned functionality only has business value if the entire process of product managing and searching works. Obviously you run the risk that this results in a big chunk work that is difficult to plan or tack. That’s why you need to explicitly distinct between the core functionality needed to allow the end-user to accomplish his task, and all the extras that make it easier to use.

For instance, the first story might only involve a simple entry form without any UI-specific considerations, validation or a fancy selection list, and a screen with a list of products from which the buyer can select one. Adapting the layout to the corporate standards, the ability to categorize products, and advanced validation should all be realized as separate user stories. And yes, I know, those stories wouldn’t be completely independent from the original story. But at least they force you to focus on the core functionality. After finishing the first story, the user will gain a better sense of the system being build and may be better able to provide feedback. In fact, in many projects the first story becomes a catalyst for new ideas and insights.

Is it the functional design?
It’s not. A study performed by the Standish Group involving more than 40,000 projects revealed several common reasons for the failure of so many projects. One of those reasons was that projects erroneously assume that it is possible to write down functional requirements in an unambiguous way.
Another one involved the equally wrong assumption that the business knows exactly what they want from the start. Hence Agile methodologies work with short cycles and strongly favor intensive involvement of the business.

That is exactly why a user story should be seen as a reminder to have a more detailed discussion with the business stakeholder at the time the functionality is going to be built. Only then you’ll be able to gain the most from the increasing insights of executing a project. And only then it is possible for the stakeholders to evaluate a live version of the system, albeit in an early stage. Watching an early version of a product is often a catalyst for a lot of new requests or changes to the requirements

But stories are finite so they cannot be used as lasting functional documentation. In other words, while the product or system is still under construction, the stories are used as a placeholder for notes, discussions, estimations and to keep progress. But when the functionality has been realized, the stories won’t have enough details to be used as a future reference. Worse, the stories are usually not even updated if improvements and additions are made during a demo to the stakeholder.

Additionally, while executing our first project using stories, we noticed that we lacked some structure. First, the team needed a central place to store the concepts and business rules from the business domain. Because I already had a lot of experience with domain models such as defined by Martin Fowler, and I got more and more involved in the principles of Domain Driven Design (a concept introduced by Eric Evans), it was obvious to me that we were going to use a domain model here.

Also, the customer representative sometimes lots the overview of the many stories that were on our list of requirements. After a bit of Googling, I ran into a whole series of posts and discussions initiated by Alistair Cockburn. Alistair had the same problems and experimented with use case diagrams to illustrate the system context. I now use use cases diagrams to represent the screens, external dependencies and processes. This appeared to be very helpful while talking to your customers about a new feature. And even though you can store the entire functional design in a use case, we stick to simple diagrams only. All functional details are still stored in the stories.

Who? What? Why?
To conclude this first part, a final aspect of user stories is the fact that traditional requirement gathering techniques usually deal with the needs or desires of the stakeholders, and if you’re lucky, with the roles a user needs to have for that. However, these techniques almost always lack the reason behind such a requirement or identify the goals the user tries to reach. Consequently, user stories must be written in the form "As who, I want what, so that I why. The who describes the role or the stakeholder in whose interest the requirement defined by the what was introduced. The why should explain why the requirement is so important for the product, the project or the stakeholder. A nice example of how that can help us as developers is that because we now know what the stakeholders tries to accomplish, we might be able to come up with a better alternative. Be aware though that you don’t end up with a reason that practically repeats the what. The trick is to keep on asking until you find the real reason.

Next time I’ll be discussing some tips and advices on how to gather and write them as well as how to control their scope.

How I keep my Git source control history clean

After years of working with legacy code, I’ve learned to value the past and will do what I can to deliver well-focused and organized pull requests

14 reasons for adopting Nuke as your next build automation tool

How Nuke solves all of the problems of PSake, Cake and BullsEye and should become your build automation tool of your choice.

The open-space format gives you a chance to hear about other people’s challenges and how other experienced folks respond to that. I attended one on building high-performance teams.

Ownership at the right level

Ownership is not an all-or-nothing concept, so Netflix acknowledges up to five levels that each give a leader and its people a tool to clarify the expected/accept level of autonomy